It is with great sadness that we report the passing of Beryl Stevens who was born in the village and most recently lived in The Manor. She died peacefully in her sleep on Sunday night. 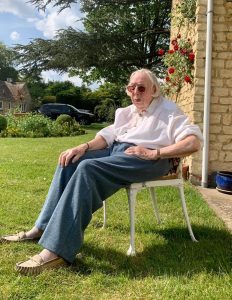 The Stevens family were the original post masters in the village and Beryl used to deliver messages, telegrams and newspapers around the village, particularly during the World War II.   She left the village to go to university in London and then taught for 4 years in Cornwall.   She spent 8 years in Australia and then moved back to London where she was administrator at Bedford College for over 20 years before returning to the village in the late ‘80s. She became an active member of the community serving on the Parish Council and latterly a member of the History Society.

A very popular, talkative and knowledgeable lady, she enjoyed sitting out in the Manor grounds on the 75th VE celebration day, where she spoke to many other residents. She had just celebrated her 92nd birthday on 16th May and  will be greatly missed.

Details of her funeral will be circulated once it is clear what arrangements are to be made by the family.

Our thoughts are with her and condolences to her family.

Part of the requirement of the grant was to commission an End of Grant Report. Set out in the … END_OF_DOCUMENT_TOKEN_TO_BE_REPLACED

And so the big weekend is upon us and whilst it has got to be good news, a word of … END_OF_DOCUMENT_TOKEN_TO_BE_REPLACED

The Parish Council has carried out a risk assessment (RISK ASSESSMENT.docx ) in compliance with … END_OF_DOCUMENT_TOKEN_TO_BE_REPLACED