You are here: Home / Featured Stories / News update no 17 for Stratton Audley

I had not planned to put out another email so soon, however a number of matters need publicising, so here goes.

First a reminder about the closure of the Stratton Park Road at the Poundon end on this coming Monday for probably three days which will cause disruption and mean we are likely to see an increase in traffic through the village on Mill Road/Launton Road.

Additionally, in my email earlier in the week regarding general EWR construction, I highlighted the closure of the Bicester Road in Launton – the stretch of road that goes towards the bridge at Charbridge Lane and that it would be closed for up to three days from the 20th July to complete the EWR compound entrance. Closure now is 22nd in order to accommodate school half term. Whilst this is still going ahead, as a result of contacting the network team at OCC, they have now informed me that traffic will be diverted via Blackthorn Road onto the A41 instead of routing it through Stratton Audley. This is good news although there is not a lot that can be done by those who choose to ignore the official signs.

Also we have requested more details of the measures they are taking to ensure the safety of people, cyclists and horses using the roads and I received an interim response yesterday and I quote:

“The various contract delivery firms have all been given a tutorial on the routes to sites that must be adhered to and on the use of voyager control. The VC is so that we have the ability to track the various vehicles to ensure that they are compliant. We have stressed the importance of being mindful of horses, treading carefully and stopping their vehicles in advance, in the presence of a horse and allowing the horses to pass safely. I am trying to gain more information on the matter which hopefully will be included in the newsletter that we are planning to distribute next week” Thaina Said, Community Liaison Officer.

The Red Lion opened last weekend and despite the overcast weather, congregating in the enlarged garden area seemed to work pretty well. There is an entirely new wine list which is quite extensive and very drinkable!

The new opening hours are: 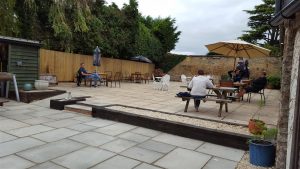 The kitchen is closed but a new service, “the food shack” @ the red lion is all set up.  The shack will be serving simple but delicious finger food that can be eaten in or taken away! TONIGHT (Friday) there is a special “Fizz and chips” on the menu from 5pm -8pm (fish and chips with a glass of Prosecco for £10).

The shack will be open at varying times so keep an eye out on our Facebook page or on the notice board outside the pub for all information!

The Shelswell Benefice are delighted to announce that there will be a service of Holy Communion this Sunday, 12th July, at 10 am in Stratton Audley Church! To enable social distancing, space is limited so you need to book your place – see details in Guidelines below.

The church recognise that not everyone will feel safe coming to a service at this time so the alternative is to join in at the same time via the live stream available on Facebook (under Shelswell News) which will also be uploaded to YouTube later in the day (look for Shelswell Parishes).

Finally a reminder that the church is now open each day for private prayer and for anyone who wishes to sit peacefully by themselves. 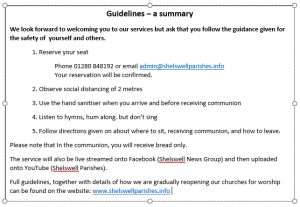 Now open at weekends from Friday through to Sunday, they are serving coffee, cake and ice cream from 10am to 4pm either to takeaway or eat on the premises. And now they have added savoury Panini’s available from 10-2.30pm. Villagers and OAPs can still get half price take-away coffee or ice cream on a Friday morning between 10-11am.

The gift shop is back in action together with the online shop. There is also an enclosed seating area in the paddock with tables, parasols and a few Bell tents to enjoy your refreshments in comfort.

As you know the Playground was opened last weekend and has seen a steady stream of visitors from both the village and the surrounding area.

All going well so far, but managing any potential risk is the responsibility of each and every one of us, therefore all are requested to follow the guidelines provided and to cooperate with each other to ensure maximum safety from the spread of infection whilst accessing the playground.

A sanitising spray together with wipes has been placed near the entrance for general use but we encourage everyone to bring their own where possible. 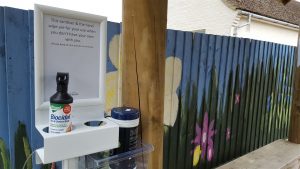 Some sobering facts regard Coronavirus in our own area

A more accurate picture of coronavirus cases in the county has now been revealed.

Oxfordshire positive tests as of Monday this week stand at 3,087, up more than 900 on the same time last week. This is not down to a sudden rise in new infections but a change in what data is released.

The rate of infection in Oxfordshire now stands at 449 cases per 100,000 people, surprisingly slightly higher than the England average of 439.

A new tracker has revealed how likely it is that Oxford City will be put on a local lockdown. The city has been ranked 16th in the top 25 places in England when it comes to the number of new cases per 100,000 people in the population which is higher than London. And it is one of the only cities in the south of England to be featured, alongside Peterborough.

Centre for Cities, the think tank which compiled the list, say it could indicate where the next local lockdown could be. Using data from Public Health England, the list said that Oxford – which has a population of 154,327, had 12 new confirmed cases per 100,000 people in the past week.

Deaths in Oxford remained higher than normal levels in May following a spike the previous month, official figures show. Office for National Statistics (ONS) figures show 79 deaths were recorded in Oxford during May. That was seven more than the number recorded in the previous year during May. However, it was lower than the average increase of 19 per cent seen across Oxfordshire’s five local authorities.

Oxford also saw a jump in fatalities in the previous month, with 86 more deaths recorded compared to April 2019. It means that in the year to the end of May 2020 there were 106 (27 per cent) more deaths than at the same point last year.

Also of interest is a new Oxford study published this week on face masks, which says everyone should be wearing them even if homemade.

Professor Melinda Mills, director of the Leverhulme Centre and author of the study said: “The evidence is clear that people should wear masks to reduce virus transmission and protect themselves, with most countries recommending the public to wear them. The study shows that, just days after the World Health Organisation announced the pandemic in mid-March, many countries (some 70) immediately recommended mask wearing and this number has now grown to more than 120 countries with most requiring mask wearing everywhere in public.

The study also shows that some coverings are not as effective as others.

Loosely woven fabrics, such as scarves have been shown to be the least effective.

Professor Mills said: “Attention must also be placed on how well it fits on the face; it should loop around the ears or around the back of the neck for better coverage.

“The general public does not need to wear surgical masks or respirators. “We find that masks made from high quality material such as high-grade cotton, multiple layers and particularly hybrid constructions are effective. “For instance, combining cotton and silk or flannel provide over 95 per cent filtration, so wearing a mask can protect others.”

The report also finds that wearing a cotton mask protects the mask wearer as well.

If you have anything you feel that the community should be aware of and would make a difference, or have something else you want to raise with the Parish Council, we are always open to ideas and in listening mode.

All the best and continue to stay  alert and stay safe.

Covid-19 There are further signs that the Government is keen to improve our lot, with the … END_OF_DOCUMENT_TOKEN_TO_BE_REPLACED